My interview with the SWW group

[fusion_text]Producer and director Mary Haarmeyer is a screenwriter with 11 screenplays to her credit who makes her home in Lovington, New Mexico. She has won awards for her scripts since 2007, including first place in the screenplay category of the 2010 SouthWest Writers Annual Writing Competition. Active in the workings of ReelFlicks Productions and T-RO Films, Mary is currently in post-production of Hunter’s Game, a paranormal/thriller pilot for television.[/fusion_text]

[fusion_text]Tell us the pitch for your latest project. Hunter’s Game is a dark, yet hopeful, drama in which we follow the life of Hunter Williams, a young man plagued with visions of future events. The show is kind of like Criminal Minds meets Hannibal meets Medium, with a teenage protagonist.

What was it about the story that grabbed hold of you and compelled you to write it? The main character. Hunter not only has the external conflicts of fighting fate in the form of killers, violent crimes, accidents, and natural occurrences, he also bears the burden of knowing that by being involved, he puts himself, his father and their new family at risk, just like his mother did before being killed by a murderer she was helping to bring to justice.[/fusion_text] 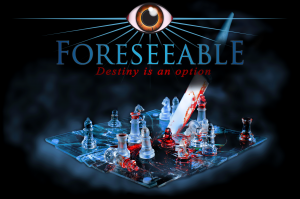 [/imageframe]
[fullwidth backgroundcolor=”no” backgroundimage=”” backgroundrepeat=”no-repeat” backgroundposition=”left top” backgroundattachment=”scroll” bordersize=”0px” bordercolor=”” borderstyle=”” paddingtop=”0px” paddingbottom=”0px” paddingleft=”0px” paddingright=”0px” menu_anchor=”” class=”” id=””][fusion_text]What unique challenges did this project pose for you?
This was something new. I pitched the show to NBC, ABC, The CW and other networks, and they loved the concept. They took tons of notes, had me come back in to pitch, but they ultimately thought it was too risky because there was nothing like it out there at the time. The show Medium was the closest to it. But I knew I had a great script and concept, so I decided to produce the film myself. Now, coming out this spring, the major networks are all producing paranormal concept shows with Believe, The Tomorrow People and others like mine. I hope they all succeed, because then my show won’t be untried.

What was the most rewarding aspect of putting it together?
Building a team of professionals from New Mexico that were excited about the show’s concept. It was amazing to see such a diverse group of people excited about a show I had created and who were willing to work on it with me to make it a reality.

You wrote, produced, and directed Hunter’s Game. Which of those “hats” did you enjoy wearing the most?
I have to say writing, though directing came in at a close second. I have loved the art of story since I was a small child. Back then I lived in my head most of the time and created exciting adventures, so to sit down and write has always been my first love. I will say directing is an extension of that creativity. As the director you have the power to create a film that mirrors the world you have imagined.

What suggestions do you have for new or struggling screenwriters to help them succeed?
I’ve had the chance to talk with several key people at studios like Sony and MGM, along with networks like NBC, ABC, and The CW. What they’ve told me is this: right now, no one, and I mean no one, is buying new scripts from unknown screenwriters (but there are always exceptions to the rules). When I asked them how a new screenwriter could ever get their work sold, I was told, “You need to build a franchise.” The major studios look for things that are already popular – a best-selling book or graphic novel, an internet series, a video game, or even a movie made 20 years ago that still has a following and can be changed to meet the times and gain a new following. Basically the studios are hedging their bets and trying to guarantee success, which as a business person I understand. Therefore, if you want to sell a script or concept, think outside the box on ways to get your story out there and build your own fan base.

Find out more about Hunter’s Game at www.foreseeable.tv and more about Mary and the crew on the T-RO website at www.t-rofilms.com.